This week I completed my Fiction Writing Level 4 Course! YAY! and I received a distinction – which made me very happy.

For my final assignment I had to write a short story of less than 3000 words – which I did. I was quite impressed with myself as I set my self the task of writing it in a week (I am a little flouncy when it comes to writing, and I know I need to be more disciplined.)

Anyway, my tutor stated that my work has the potential to become a Novella (20,000-50,000 word story) which set me thinking.

You can see from the screen shots below that for “self publishing companies UK’ Google returned 3,790,000 results

And “Self Publishing” returns 11,200,000 results – which is going to take me along time to work through! but I will continue researching – and hey if you have any comments or ideas or even tried self publishing yourself let me know in the comments! 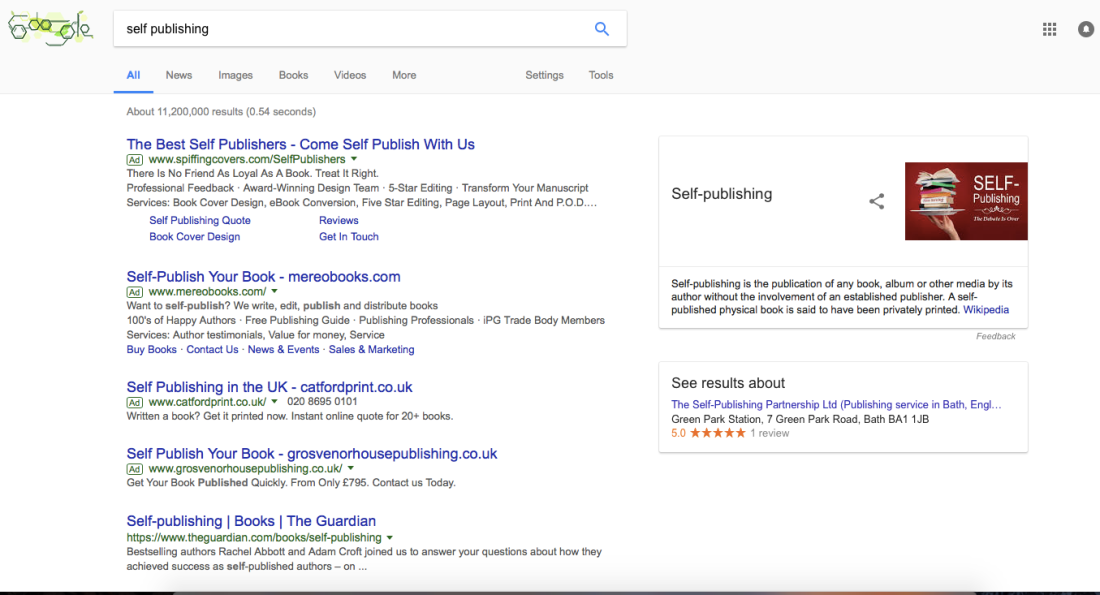 So I am currently in the process of finishing a Home Learning Course in Novel Writing. It’s only 5 modules plus a final exam, so it’s not a very difficult one or lengthly. But I am still enjoying.

Anyway in Assignment Four it says:

Create a scene between a husband and wife in which the wife accuses the husband of having an affair. Us the dialogue to carry the plot forward a part of a novel’s story-line to reveal in part the character of the husband and the wife, the relationship between them and the other member of the triangle. Give some indication of the current setting, reflect the tension of the situation, and use the dialogue to convey some background abut the characters. Make the dialogue flow as naturally as possible. Write no more than 800 words for that part of the assignment.

Now that seems simple enough doesn’t it. But I have the horrible habit of over complicating things and panicking. But either way I am using the Home Learning Course as a way, to distract from the lengthly process of heavily editing my novel.

Anyway; this is what I wrote for the assignment;

“So, are you going to tell me about it?” Jennifer questioned, her arms folded across her chest.

“What do you mean?” Thomas responded, his gaze avoiding hers.

“You know exactly what I mean.” Jennifer tried to keep her voice level.  “I am not stupid, even though you would like to think I am. I have heard the late night whispered conversations and giggles. The quiet and soft I love you.” Her voice shook. “I have heard it all and I have cried over every single word.”

“Jen, I never wanted you to find out like this. I was going to tell you I promise, I just couldn’t seem to find the right words or the right time.” His voice low and he still couldn’t bring himself to look at her.

“You couldn’t find the right time?” There was a frown on her face. “Thomas there is never a right time to tell your wife of twenty-nine years, that you are banging a twenty-three-year-old. Who I would like add is the same age as our youngest daughter.”

“Leave it Jen.” Thomas stated dismissively, as he waved his hand towards her.

“I am not going to leave it.” Her voice was full of anger, as she slapped her hand against the marble counter top.

“You do not have the right to tell me to leave it. After twenty-nine years I deserve to hear why my husband decided to throw it all away for some stupid little young woman who opened her legs for you!”

“It wasn’t just sex! She is everything you aren’t!” Thomas shouted, “She listens, she cares. I feel valued when I am with her”

Jennifer could not stop a small laugh escaping her lips as she rested her hand on her chest. Her pale pink blouse began to feel heavy against her skin, as if it was suffocating her.

“She made you feel valued! Thomas, you are more idiotic than I ever thought you could be!” Her heart was racing and she couldn’t just fix upon one emotion. “Thomas can you actually hear yourself? You sound so pathetic.”

“Enough Jen!” He shouted as he paced around the solid wooden kitchen island. He angrily ran his hands through his greying hair.

“How did it start? Tell me. Was it flirty little exchanges, then a drink, then a drunken kiss…” She arched an eyebrow, “Come on tell me!” She shouted.

“I don’t know. I was already in before I realised what was happening.” His voice was low. A single tear slipped down her cheek and Jennifer quickly brushed it away.

“So, you threw away everything we had and have for a tart who made you feel special?”

Thomas did not say a word, he just kept pacing the kitchen and staring at the floor.

“Talk to me!” Jennifer shouted as both her hands made contact with his broad chest and pushed him away.

“I want to know, why! Why Thomas?” The tears were now falling rapidly down her rounded cheeks.

“I don’t know. She is everything you’re not.” Thomas stated.

“Wow.” Jennifer said hurt as she took a step away from him. “So how long? I mean are we talking weeks, months, years?”

“About a year give or take.” Thomas could still not look at her.

“You have been lying to me for a year, coming home and sleeping next to me after being with her. I can’t believe this.” Jennifer felt sick and disgusted. “How dare you! The sex sweat had barely dried and you were sliding into be with me? You are a vile and pathetic man.” A laugh escaped her lips “What are our children going to think? You have not only destroyed my life but your children’s as well.”

“They will understand, once I explain everything.” Thomas’ voice was full of panic and worry.

“Will they?” There was a sarcastic tone to Jennifer’s voice. “I was the one who was there for every scraped knee, the one who took them to ballet. I was there for every performance, every meeting at school. I helped them find their voice when they lost it. I made sure that they would grow up into strong independent women who would not need to lean on a man to support her.”

“You did it brilliantly.” Thomas stated flatly.

“Yes, I did it bloody well.” Jennifer stated flatly. “I know that our girls will be strong enough to make up their own minds and not believe whatever story you spin them.”

They both fell into an uncomfortable silence, rage seemed to seep from both of them.

Thomas looked around the kitchen, that had cost him thousands to build and choose and wondered if he could ever get it again.

Jennifer on the other hand looked around the kitchen and felt disgusted, money that he had made spent on a kitchen she didn’t want or need. They got it because he wanted it.

It was in that moment that Jennifer realised, she did not want anything from Thomas, the twenty-nine years that they had spent together obviously meant nothing to him and so she wanted nothing from him.

So that was my piece, I don’t think it is my best work – but I believe that in time I could possibly expand it to a short story or a novelette but I should have my assignment assessed and graded in the next few days and I am very much looking forward to seeing the response.

In the mean time – What do you think?

Well this is my first blog. . . and I am not really sure what to write.

So I guess I should start by explaining why I have decided to write this blog. I would say the main reason would be to practice and hone my writing skills.

Also to have an outlet for small pieces of writing and to hopefully gain feed back from fellow readers and writers.

Another reason is to follow my journey from unpublished to hopefully published author.

Also a place to share what I learn and also post links to websites which I have found useful.

Anyway that’s all from me at the moment,